If you are a wireless camera user of the second kind, you will need sufficient knowledge of the battery of your wireless security camera. If the battery of the camera dies, it will stop recording any video or audio. So today, we will discuss the various kinds of batteries that can be found in a wireless security camera and how long users can use those batteries before their charge runs out. 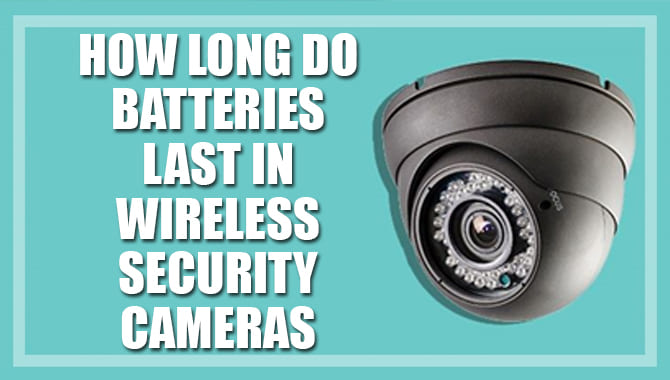 Wireless security cameras work the established principle on which all wireless devices work. Instead of connecting with a wire, they connect using a short-range signal with a nearby hub or device.

A closed-circuit camera is integrated with a wireless signal transmitter; the security camera sends signals that are short in range. Then the signal is received by a receiver. A receiver can be any kind of device that has a signal receiving module, such as smartphones, tablets or special hubs provided by the security camera company.

For outdoor use, where the camera and the receiver are not in the same room, and there is a wall between them, the working range can come down to 100-150 feet as the walls between them corrode the signal.

Where to Use Wireless Security Cameras

Though most wireless security cameras are connected with on wire for getting power, there are some wireless cameras that run on batteries. This concept of battery-running cameras is relatively new, and very few companies in the market are making them. But people are generally drawn to the battery cameras as they have no wire attached to them and can be fitted in any remote area.

Nickel metal hybrid batteries are very common and accessible. They feature an energy-dense battery system. Thus, the average backup of these batteries is more compared to lithium-ion batteries. These batteries can be found in all shapes and sizes, which makes them compatible with all kinds of wireless security cameras. Nickel metal hybrid batteries are also very safe as they have a lower number of active metals. The downside of these batteries is that they are sensitive to high temperatures and also require a longer time to charge. These batteries have a very high rate of self-discharge and should not be used for low-charge devices.

Lithium-ion batteries are very light and small in comparison to other types of batteries. This battery features a high voltage output and a significantly low self-discharge rate. The recharge time of these batteries is also very low, which makes these batteries very lucrative to consumers. The disadvantage of a lithium-ion battery is that it is not always compatible with different types of devices and sometimes gets damaged quickly.

The average backup time is 10-12 hours for a fully charged battery. This battery backup time also depends on the type of wireless camera it’s attached to. If the wireless camera has advanced features like 360° rotation or zoom lenses, it might require more power and consume more battery. On the other hand, simple wireless security cameras require much less energy and, most of the time, and the battery lasts longer than usual in these cameras. The batteries are mostly removable, and any user can remove the batteries from the cameras very easily. After the charge is finished, the user can recharge the battery again to use it for the next time. We recommend that you keep more than one battery pack so that if you need to use the camera after 12 hours of use, you can just swap the batteries and put the previous battery on charge.

Battery technology, as well as wireless camera technology, is getting better day by day. Companies are introducing updated products regularly. We can surely hope that the charging and lasting time of these batteries will increase very soon.