Bear Spray is a kind of bear deterrent spray that is used to scare away wild bears that might be charging at you aggressively or chasing you. Long ago, pepper spray was used to deterrent bears. Though it worked at a certain level, it was not as effective.

Then in the middle of the 1980s, the bear deterrent spray was invented by a graduate student of the University of Montana. A bear spray which had a range of 30 feet and a seven minutes spray time, was developed. It was an aerosol spray and still is to this day. So, what does bear spray do? Bear spray is simply a high concentration of pepper that is used to deter aggressive or charging bears. Carrying bear spray on your person can give you better peace of mind while hiking in bear country, But it will not ensure your safety – if a bear attacks you,  it will still be very dangerous. The most effective use of bear spray is to prevent a bear attack by not surprising a bear and making noise enough to avoid a surprise encounter.

Suppose you do come across a bear at close range. In that case, the best deterrent is to take your pack off, stand up (standing sideways may make you look bigger),  Make yourself as big as possible, hold your arms out, yell loudly at the bear while backing up slowly and if the bear continues to approach, spray it in the face with your canister. 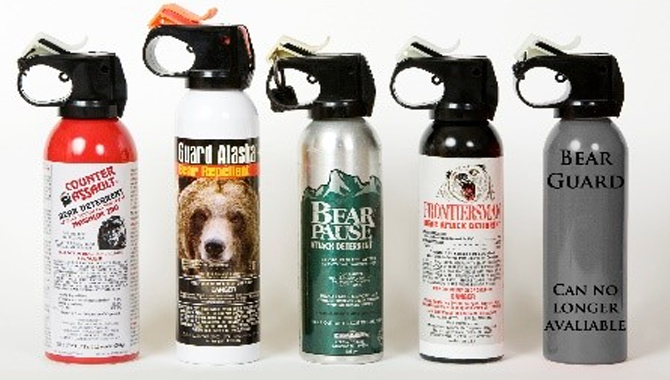 There are different types of bear sprays available in the market. Some sprays have a spray time of 4-6 seconds; others last for 15 seconds. Then there is varied depending on the length that is covered by the spray. There are small sprays that can spray up to 15 feet. On the other hand, the strong variant of the sprays can spray up to 30 feet. It is recommended that you use a bear spray with a high spray rate if you are visiting a place that has a high density of wild bears. 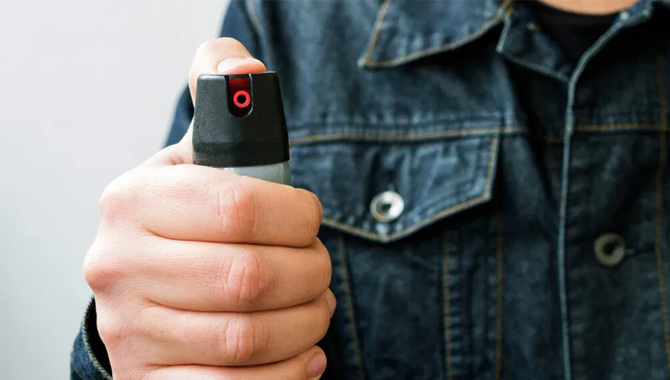 There are rules and regulations that specify exactly when and where you can use bear deterrent spray. The standard rules were set by the University of Montana originally. The recommendation set by the University of Montana is sufficient to protect yourself from an attack from a bear. You should in no way use a bear deterrent spray to harm wildlife or nature. Some of the common and most useful rules are stated below for the betterment of your journey.

How To Use A Bear Spray Bear spray is only to be used at a bear when the bear is charging at you at high speed or trying the attack you or anyone besides you. You should to intentionally approach a bear and use bear spray on it. If you see a passive bear just strolling or taking a rest, avoid that bear and do not use the bear spray on it. It is essential that you know beforehand that how the spray works. You have to study the mechanism of the spray and practice spraying before you go to the wilderness.

It should be known that you do not have to aim at the bear directly. Just spray it slightly downward while facing the charging bear. If the bear stops and starts to run away, then you can stop spraying. But you will need to be ready to use the spray again if the bear chargebacks again.

Always put the bear deterrent spray in an accessible place, so you don’t have to look for it in a bear attack. As a bear is very fast while it’s running, you will have to be very swift while operating the spray. This is why it is best to try out yourself beforehand in an open field. Make sure you don’t use it on anything or any person while practicing.

What Effect Does Bear Spray Have on Bears 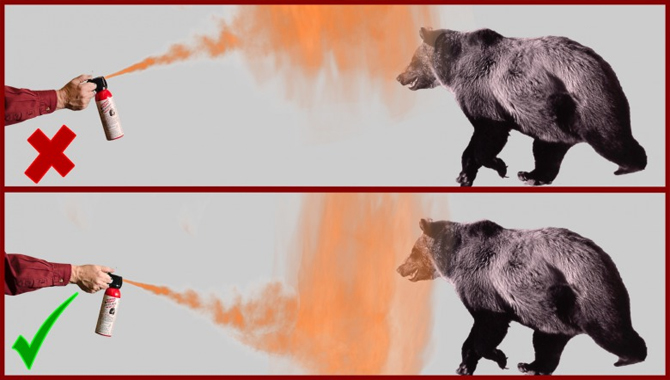 When a bear is running, it needs to breathe deeply. When a bear breathes into the deterrent spray, what happens is that the bear breaths in the Capsaicin that is present in the aerosol spray. Capsaicin causes the inner parts of a bear’s body to have an inflammatory effect which distracts the bear from attacking its prey.

The mouth, throat, nose, eyes, and lungs of a bear are affected when it inhales the deterrent spray. This spray also swells up the bear’s nose and blocks it from having a sense of smell. It also blocks the vision of the bear as its eyes become watery and its vision becomes blurry. The hearing of the bear is also reduced in this process.

The Risks Of Using Bear Spray

Some risks of using bear spray improperly include:

Bear spray is a very effective tool to scare away any wild bear and save yourself from a bear attack. Every traveler exploring the wilderness should consider bringing at least one bear spray with them. The traveler should also be careful of the rules of usage of the spray, as well as the process of spraying. I hope now you know what does bear spray do.

1.Why Do I Need Bear Spray?

Ans: The effective range of most canisters is about 30 feet, while wind impacts how far the spray will reach. The reason why bears are deterred by bear spray is that they have a keen sense of smell. Pepper gets into their mucous membranes and irritates, and causes pain.

This is generally enough to make them leave. The fact that the bear spray is a non-toxic food grade product makes it safer for both you and the bear than bullets or larger canisters of pepper spray, which are designed to disable humans such as assailants in an attack situation.

2.What Happens After You Use Bear Spray?

Ans: Here are some facts about the effects of different bear spray ingredients. Bear deterrent products containing capsaicin and related capsaicinoids (pepper spray) temporarily cause blindness through severe irritation of the eyes, an intense burning sensation of the skin, and forcing the closure of the tear ducts. Capsaicin is the active ingredient that makes hot peppers hot – you could just substitute jalapeno or habanero pepper in your food for an idea of how hot it is.

3.Why Is Bear Spray Stronger Than Pepper Spray?

Ans: Pepper spray is created by extracting the “heat” (capsaicin) from peppers and using that to create a chemical aerosol spray. The point of creating bear spray was to provide something that would deter an attack and have more stopping power than pepper spray made for humans.

Because bears are much larger than humans, they require more of a solution to affect them. The capsaicin in bear spray is the same as pepper spray, just multiplied by a factor of 10 or more to create something that will have effective stopping power.

Ans: In short, no. There have been zero recorded human deaths from exposure to capsaicin, the primary ingredient in bear spray.