Disarming someone with a knife is one of the toughest thing to do if you are not holding any weapons. But still there are some ways to fight back and minimize the chance of getting injured. So let us discuss those. So, how to disarm someone with a knife? Let’s think of a moment when you are being attacked by someone with a knife, there can be two specific situations. 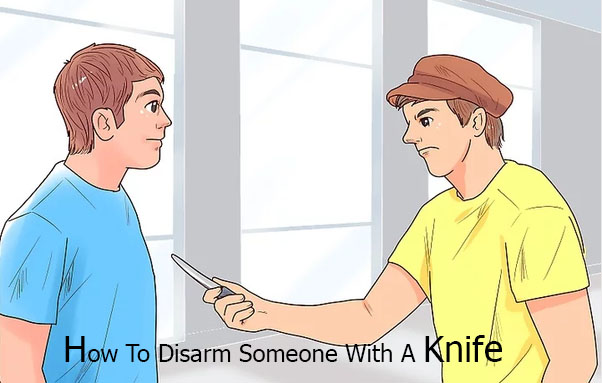 2 Ways To Disarm Someone With A Knife

1. When You Do Not Have Any Weapon Or Anything To Defend

2. When You Have Something To Defend Yourself

1.When You Do Not Have Any Arms Or Anything To Defend:

There are some advices to follow in this situation:

b. Call For Help

While running start shouting and calling for help. If you run towards a populated area, there is a chance you can get help.

c. Try Grabbing Something To Protect Yourself

Try to grab something wide and possibly made of metal or any hard element to protect yourself from the attacker. Protect your stomach, lungs and front part of the body as this part is most vulnerable to knife attack. Using a shield against the attacker can save you from serious injuries or bleeding to death.

d. Kneel Down And Attack The Legs Of The Attacker:

If you are fast enough you can kneel down and grab the attacker’s legs and he/she will lose balance and fall. Then you can run from that place.

f.Try To Grab A Weapon:

Try to grab anything made of wood or rod to fight back if you have no other option. Now that you have a weapon, it brings us to the option 2.

2.When You Have Something To Defend

If you have something to defend yourself (like firearms), you can use that weapon against the attacker.

If you have any weapon to defend yourself, first try warning the guy from a distance. There is a chance he/she will give in if you have a lethal weapon. So, you can get an advantage over him.

If you are carrying firearms, it’s not likely that anyone is going to attack you with knife. But still anyone does, try to disarm him by shooting at his knife-wielding arm. If you are successful doing that, try to kick the knife as far as possible.

If you have a pepper spray in bag, this is the time to use it. Aim at the attackers eyes. It will not disarm him, but make enough distraction so that you can get away.

If you have a rod or stick try to disarm the attacker by aiming at his arms. It is better if you use a blunt object, that way you are not doing any serious injury. But you will create enough distraction to get away from the place.

Did you know about 9 Best Home Security Door Locks

Do not go too close to the attacker. Maintain a minimum distance. So that he/she does not make any sudden movement. If the attacker doesn’t have a strong grip and he is distracted anyway, you can easily grab his knife.

vi)Aim At His Weak Points

You can aim at weak points like eyes, elbows and knees. That way the attacker will lose his balance and you will have a chance to run away. Try kicking aiming his stomach.

This low weapon defense is for any low weapon attack that comes in below the 90-degree point of the attacker’s elbow. The type of grip, side, or exact angle he strikes from doesn’t matter. Begin by covering and protecting yourself with your off-hand (the hand not holding the weapon).

Respond with your hands in this low position. This low defense is different than most low defense techniques, in that you do not want to bring your arms up and outwards in a circular motion. The attacker may be thrusting or slashing low, so there’s no telling what path he might take.

Instead, you should plant your feet so they’re shoulder-width apart. Your hands should be low and tight to your body for this low defense technique. The arm closest to the weapon should come up in an arc, while the other arm remains low and tight to the body.

I hope now you know how to disarm someone with a knife.

1.What Are Some Self-Defense Tactics I Can Learn?

Answer: You can learn some self-defense tactics to protect yourself from the attacker. Some popular strikes that you can use are: Elbow strike, Groin kick, Hammer strike etc.

2.What Weapons Should I Carry To Disarm An Attacker?

Answer: You can carry a pepper spray or pocket knife if you feel threatened. It’s better to be alert than being attacked.

3.Is It  Legal To Carry Pepper Spray?

Answer: Yes, It is legal. But you can only use it to protect yourself.

4.Can I Disarm Someone Wielding A Knife Barehanded?

Answer: According to Wikihow you have 80% chance of injury if you are barehanded. But still if you get a chance to fight back, you must exploit it.

5.Should I Try Disarming If  I Have Option To Run?

Answer: No, if you are barehanded, you have a high chance of getting hurt. So, if you are not any martial art expert, your first option will be running as fast as you can. But if you do not have this option available, then you have to try disarming. Despite using these tactics, we all know it is difficult for a civilian to get away uninjured from a knife attack, but it is better to fight with vigor and wit as much as you can than just getting stabbed.