It is no longer news that the world keeps proving itself to be unsafe day by day, people always trying to hurt people for nothing, people trying to steal from people. And even though most of us believe that we are safer in our cozy homes than the outside world, it is not always the case.

Sometimes being at home could pose a much bigger threat than you would ever expect or imagine. It is not anything near a good feeling to be robbed, especially when you live in a neighborhood where robbery happens almost all the time.

Everybody needs protection, in fact everybody deserves it. it could be quite comforting to know that the police and other security agencies are in the neighborhood but it doesn’t quite take away the possibility of getting attacked. An attacker could be a friend who just came to visit, a random person pretending to be a visitor and so on.

You should never leave your safety and that of your family to chance. I will take you through a list of some of the Best Non Lethal Home Defense Weapons and affordable that you should invest in for your own safety but you should know the benefits of having them, so I’ll write that out right below. Guns are good, they’ll scare the bullies before you even get to pull the trigger but there are factors that make them a little bit hard to get, like the cost of owning one,

Unavailability for civilian use in some countries and states, some situations may not require pulling out a double barrel or pump action and what if the attacker gets the gun first. Well, here are the benefits of having a non-lethal weapons. 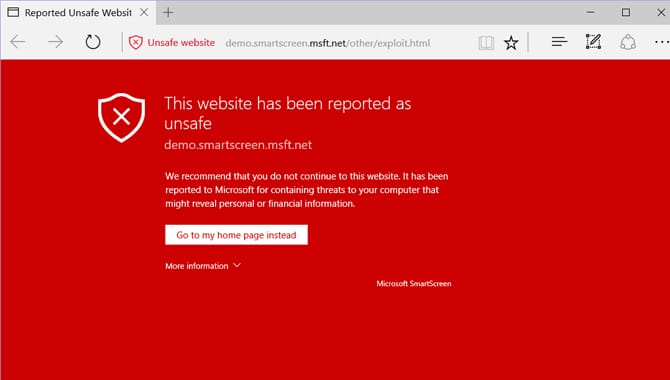 At the sight of some of these dreadful weapons, predators cower. You want to instill fear in anyone who dares to think about hurting you or your family, a non-lethal weapon will help you show anyone that you’re not taking chances with you and your family’s safety.

2. Takes Fear out Of  Your Mind

Nothing gives you more confidence inside your own house than knowing that you have something to protect yourself with against an attack. Attackers won’t always come but if or when they do, you should be prepared.

As I said earlier, guns are good but it may cost you quite a lot to get a good one for yourself. These home self defense weapons are affordable and of great usefulness when it comes to defending yourself.

4. You Can Hurt Your Hand, Not A weapon 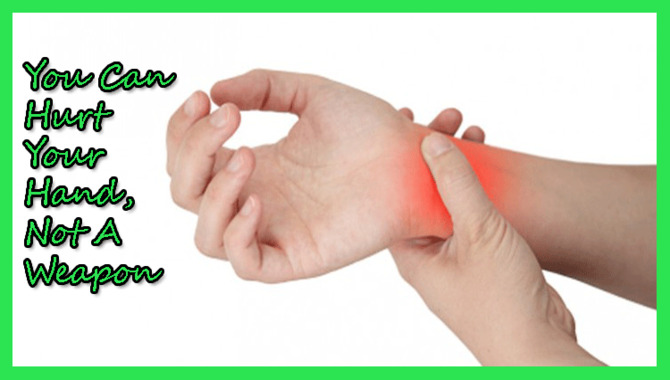 While trying to defend yourself against a predator without a weapon, you will have to hit and punch and do all kinds of things trying to attack the predator.

You will usually feel the pains even if you end up winning the fight. Using a weapon will make that a lot easier and less painful because it wouldn’t be your fist hitting the attacker, but your quality and affordable non-lethal weapon doing the job for you. 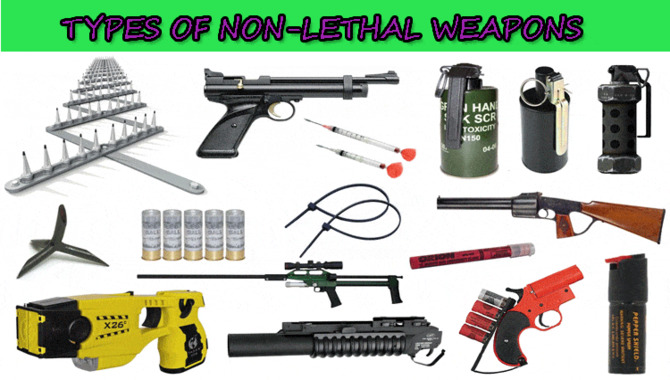 Stun guns will most definitely come in handy when it comes to self defense. Any home invader that is courageous enough to keep coming at you even after seeing the spark and lights coming out when you turn it on would definitely get dropped by the incredibly high voltage.

Don’t worry though, you haven’t killed anyone, they’ll just stay down there unconscious until the police comes. Do you know the best part? When it is on, the invader cannot snatch it from you because of the metal shock plates it has on its sides. It is really not expensive and you need to try it out. 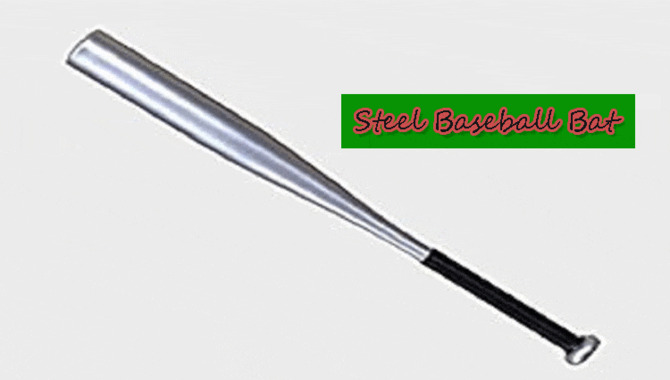 Whether you play baseball game or not, having one of these strong self defense equipment at home is a win win, especially when you actually do play baseball. The thing that people don’t know about self defense is that, even a short stick can help you extend your reach by some inches.

This baseball bat will surely knock the invader off with just one hit if he doesn’t back away at the sight of it. It is long and made of hard enough metal that is capable or wreaking damage on the attacker to keep him down long enough for you to decide what to do with him/her. 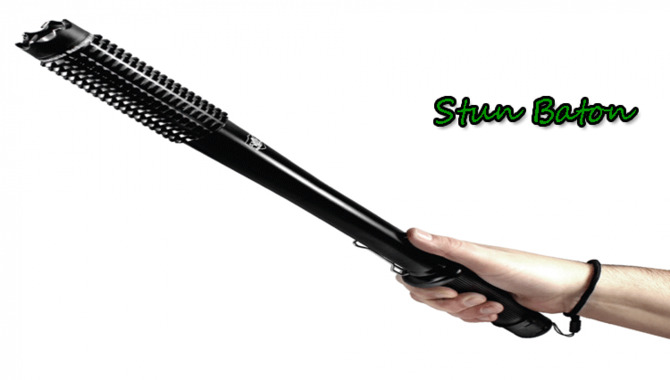 A stun baton is a combination of a stun gun and a baseball bat. It gives you a much longer reach with the electrical goodness of a stun gun. A lot of stun batons come with millions of electrical volts and bright LED lights to give you better night vision.

The batteries are chargeable so you can keep them constantly charging while you carry out your daily routine. It is a really smart way to protect yourself, your family and your property. 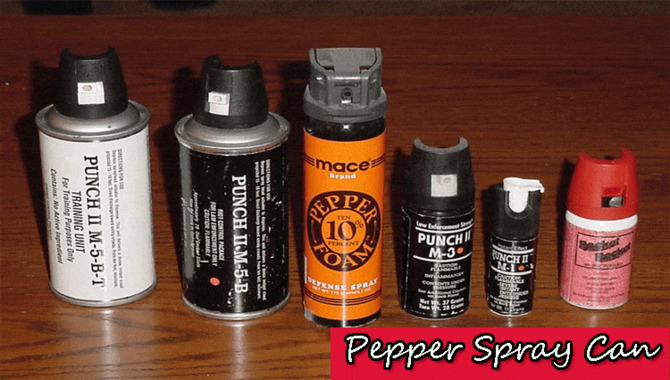 A pepper spray can has always been an amazing self defense tool. It is known usually to be in women’s bags and has been protecting many.

You may not want to get too physical with the attacker and engage in a combat, a pepper spray can will offer you a great alternative. All you have to do is point it towards the invader’s face and press it and you can bet they’ll be too busy nursing the pain to have any time for you. 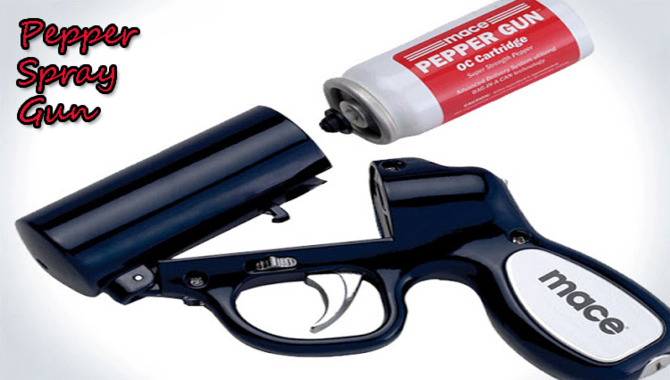 I am completely into this one, just like the stun baton, it combines the technology of a good hand gun and the damage of a pepper spray.

In case you don’t want to get too close to the invader, you can fire from a distance and release chemical pepper spray that will keep the attacker down and screeching in pain to give you a reasonable time to make them pass out or run to safety.

You have to check though if it is legally accepted in your country or state but it should be legal because it is totally non-lethal. 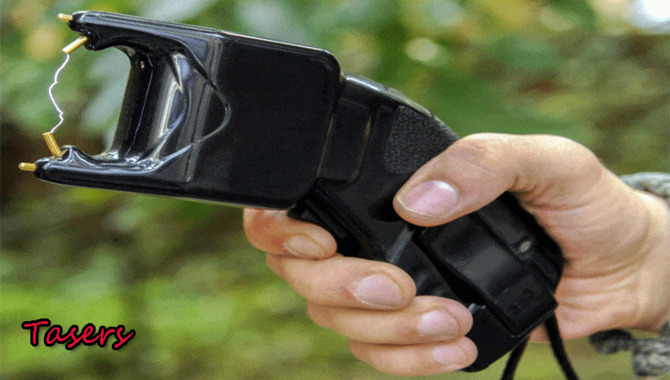 Tasers are another double advantage non-lethal home defense weapons with their combination of a solid firearm and a high voltage stun gun you can maintain a good distance from the invader while bringing him to an unconscious state.

Some tasers have ranges of about 15 feet and more with Electro-Muscular Disruption systems that shuts down the central nervous system of your target, keeping them down for a good long period.

You may not intend to take the life of an attacker but not mind taking them down in order to protect yourself and your family, then a taser is the equipment for the task.

7. Get Yourself A Dog 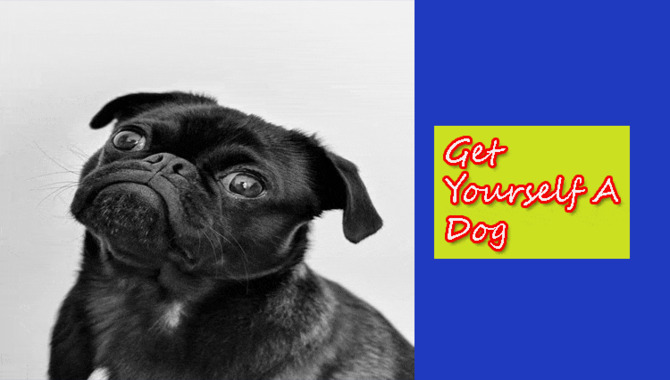 Whether you’re a dog lover or not, a good guard dog will always come in handy when it comes to home protection. If you are a dog lover then this would turn out to be a win win situation for you. Having a dog that can be your pet while at the same time your security option is just amazing.

A dog is useful and not only for preventing human invaders. A dog will help chase off other destructive and dangerous animals like snakes and the likes.

It will even deter potential robbers from considering the thought of coming in. It is worthy to know though that if a guard dog is what you want to get, then you need to make sure it is a big enough and trained one. 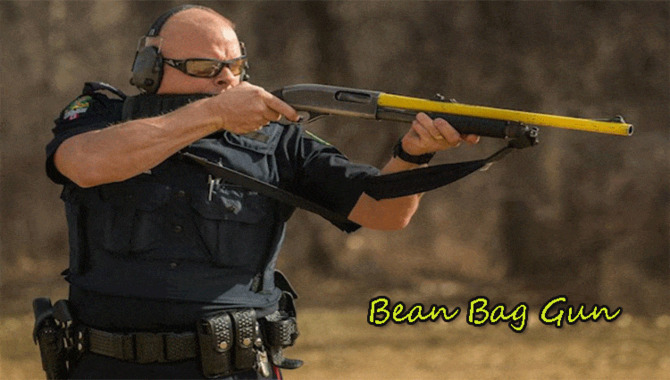 Bean bag guns are totally amazing with it comes to self defense, firing at an invader with a non-lethal weapon that either inflicts pains that chases them away or make them pass out for you to be able to get them arrested. From an extremely close distance, the rounds could kill the attacker. 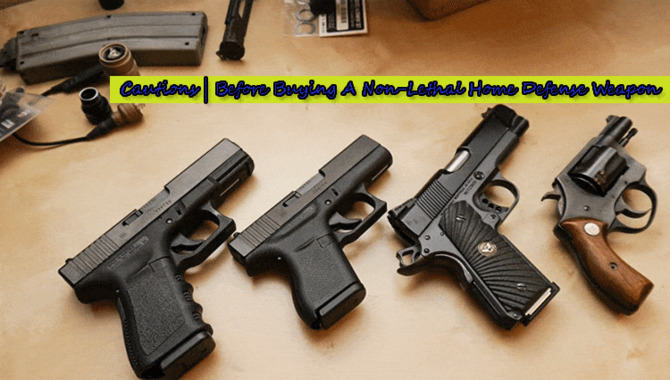 There are really important factors to consider before you decide if you should buy a non-lethal home defense weapon or to decide which one you need to buy. Here are some that you need to consider:

they can be really free and want to get experimental with everything they see in the house, so before buying the weapons, make sure to consider going for a weapon that even if handled by kids, it would not hurt them.

2. A Secret Place In Your Room:

you know your house better than anybody else, especially a stranger who is trying to rob you, so you want to make sure you have a particular spot in your house where you can keep the weapon so that you can run to get it when your home gets attacked.

You don’t want it to be laying around anywhere in the house where even the attacker may get a hold of it before you do.

do not purchase a home defense weapon just because your friend has it. Make sure to get one that suits your style and frame of mind, if you’re not so big on shooting or handling handguns, you should make sure you don’t force yourself into it.

There are several other home defense weapons that are way cooler than the ones the look like guns, so go with your mindset.

Ans: Yes, it is legal to own a nonlethal gun in all 50 States and does not require any special license or training. The only thing of note here is that — under certain circumstances — this could be lethal, especially if fired at someone’s face or throat.

2. What Is  The  Most  Powerful Nonlethal Gun?

Ans:  The Byrne Launcher. This pump-action nonlethal weapon shoots projectiles at 300 feet per second (fps) up to 60 feet with lethal force. The Byrne Launcher uses compressed air which means no sound or muzzle flash, this makes this non lethal gun virtually undetectable.

Ans: Yes, under certain circumstances. Any firearm may be carried concealed without any kind of permit or license in this country if it is done so on private property; however, the legality of carrying a weapon (openly or concealed) varies by state and locality.

4. What is The  Most  Effective  Weapon?

Ans: Nuclear weapons are the most effective weapon by far. Their respective yields, lethality indices, and respective amounts of damage make them superior to any other weapon. A 25-megaton hydrogen bomb is the most powerful nuclear warhead ever created by the United States at a yield of 25 million tons of TNT (25 megatons).

Ans: Monkey’s fists are a type of knot most commonly tied at the end of a rope to serve as a weight, making it easier to throw, and also as an ornamental knot. They were initially used on ships in order for sailors to utilize them when working aloft or with lines over their heads.

Non Lethal Home Defense Weapons are the real deal when it comes to defending your home, keep your property safe, keep your children safe and keep those insensitive hoodlums out. Don’t forget to share with us if you get something more convenient.