The bullet is a metal that is elongated and is given the shape to fire from a firearm. Rounded lead balls were used as a bullet in the earliest time. Since then, those undergo many developments, and now almost all the bullets have an elongated shape that is designed to hit a long-distance target. 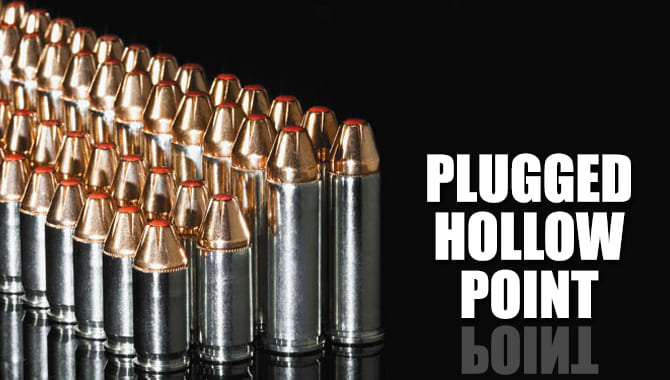 What is a Hollow Point Bullet?

These are more precise and foreseeable in comparison with the pointed ones. Pointed bullets are more air resistant than hollow point bullets but more sensitive to the air. The hollow point is, without any doubt, a very high standard ammunition while it comes to defense. Other hardball or regular bullets do not execute like the hollow point.

You will not find anyone who will tell you the regular bullets are better than the hollow point in case of home defense or concealed carrying. But, why is it better? The answer is the bullet’s expansion on impact; the penetration is not always the only solution. Hollow point bullets are commonly used in defense because they expand and stay in the body’s soft tissues after penetration.

Why Does a Hollow Point Bullet Expand? 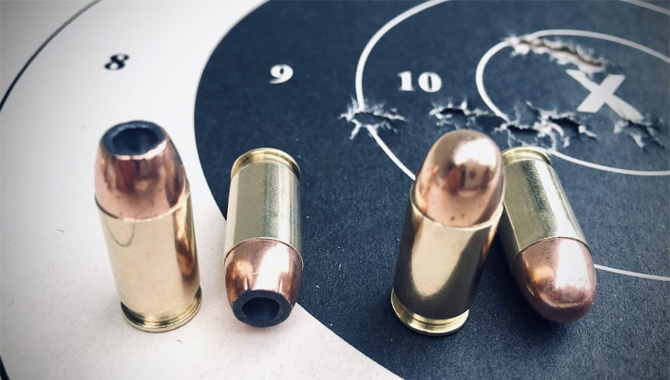 Most of the regular bullets are made of two shells. The inner shell is soft and is made with lead. The outer shell is hard and is of copper alloy. The two shells are together called a jacket. The most commonly used bullets are those with a full metal Jacket, also known as hardball or FMJ as a short form. Hardball often fully surrounds the soft lead core, including the tip under its hard metal jacket.

As I have told before, hollow point bullets do not have a pointy tip, and these have a well or hollow point on the tip that exposes the inner soft metal to the outside. After firing a regular full metal jacket bullet, it directly punches through the soft tissues. But the bullet does not get deformed due to its hard metal shell until it hits something very hard.

When a hollow point bullet is fired, it gets deformed because of the exposure of soft metal on the tip. While the tip touches the soft tissue, the pressure is more than the handling capacity of the bullet to maintain its structural integrity. This expansion makes the bullet mushroom like that gets slowed down and stays inside the soft tissue. It does not over-penetrate or leaves the targets body.

Why Hollow Point is Better in Self-defense- 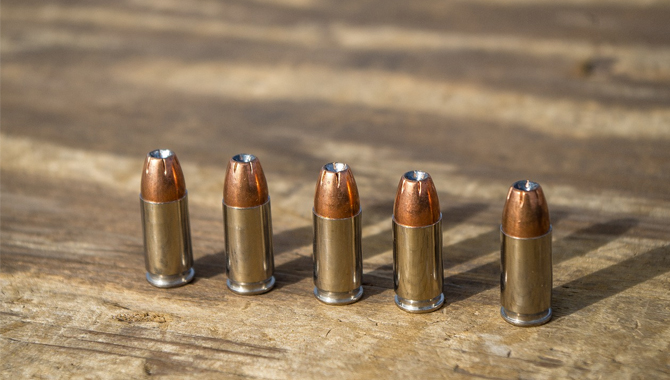 A full metal jacket bullet creates a hole in the target’s body and passes through it most of the time. A hollow point bullet is always a better option because it expands after penetration. Soft tissues always tend to close the wound because they are elastic. Even a bigger size bullet can not leave a larger wound because of the soft tissues. Not only the wound but also soft tissues try to close up the wound cavity. So, you have to fire again to the same spot to do incapacitating damage to the target, which is quite difficult.

If the hole is smaller, you must fire the gun more accurately to hit the last spot. Hollow point bullets expand after entering into the target’s soft tissue. This expansion causes a larger wound and wound cavity inside the target’s body, increasing the chances of incapacitating damage. The expansion makes the bullet much slow, and there is a very low chance of leaving the target’s body. This is why hollow point bullets will be a very good choice for your self-defense.

Difference Between a Regular Bullet and a Hollow Point Bullet 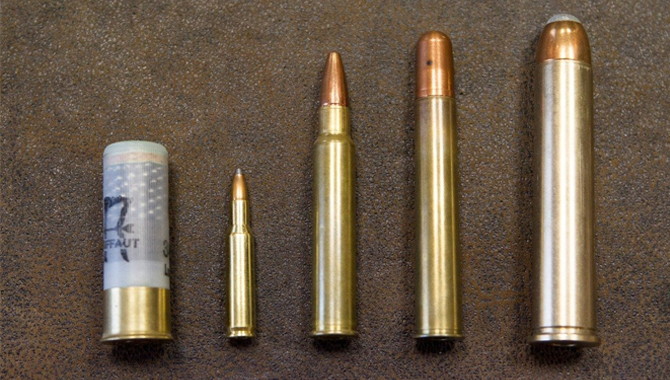 The main aim of the presence of the hollow is to make the bullet expand after penetration. This expansion is very important to make the bullet causing more damage. This also makes the bullet stay inside the target’s body which cases the firing more lethal. These two types of bullets have their particular advantages. Know your need before choosing the bullet for your firearm. 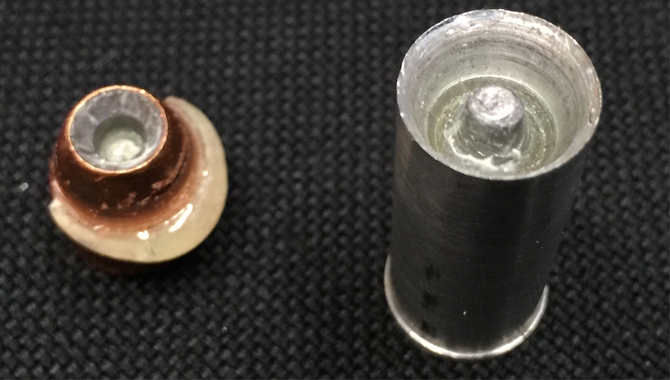 There are some disadvantages of the hollow point bullets. The major disadvantage is the lead might come out, or the bullet might expand before enough penetration. There is almost no chance that the target’s body will be exposed. The bullet might get expanded after being in contact with the target’s cloth if it is a bit thick. The hollow part may fill up by the inner soft metal.

The hollow point bullet manufacturers tried to solve these issues, and they developed a copper plug for the hollow part. This prevents the soft lead from coming out and also the grabbing of material during penetration. Some people also use silicon as a hollow point plug. But the factory-manufactured hollow point plugs are always better than the homemade ones.

It is not very easy to insert a silicon plug inside the cavity of a bullet. The cavity must also be made; hence the silicon perfectly fits inside and stays there. It must also have the ability to make controlled expansion. The polymer is also used in some cases as a hollow point plug.

The Legality of a Plugged Hollow Point 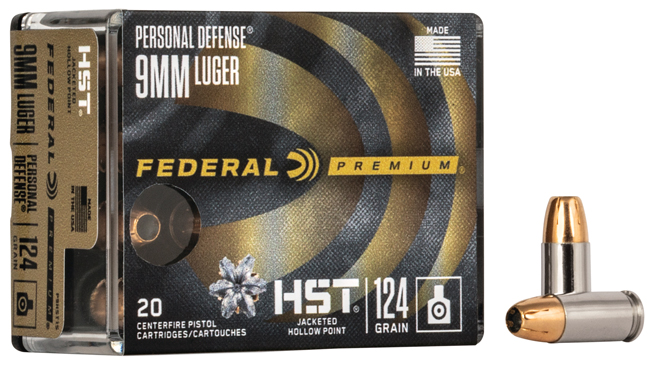 Any modification, changing, and alteration of your self-defense firearm is forbidden in almost all states. So, it would be best if you did not modify a hollow point bullet to make it plugged. If carrying plugged hollow points is legal by your state’s government, you should buy from the manufacturing company instead of self-modification. If it is illegal in a state, do not even pass by that state carrying your plugged hollow point. You might face legality issues for carrying that is illegal there. Always know the law before traveling to a new state if you carry a firearm.

There are some reasons why a plugged hollow point is important. Plugging makes a hollow point bullet more reliable, more penetrative, and enables it more controlled expansion. Plugged hollow point bullets should be your first choice if you use them for your self-defense. Never modify or alter any parts of your firearm. Use what the manufacturer provides and, of course know the law related to the firearm you want to use.

1.Why Should I Use A Plugged Hollow Point Bullet?

Ans: You should use a plugged hollow point bullet for several reasons. First, the plug will keep the hollow cavity from becoming obstructed with clothing fibers, dirt, etc., reducing expansion. Second, it will prevent the hollow cavity from becoming filled with body fluids that could increase expansion or cause other unpredictable results. Third, if you are using a semi-jacketed bullet, the plugged hollow cavity will keep the nose of the jacket from being pushed into the core upon impact. This improves accuracy.

2.Which Hollow Point Should I Use?

Ans: There are several good choices available to hunters wanting maximum expansion with minimum risk of inadequate penetration or poor terminal performance.  The Remington Premier Accutip (#1755) is a 110-grain bullet with a J4 expandable nose that will mushroom to an average of 1.4 inches in ballistic Gelatin at velocities between 1400 and 1600fps.  This load is available in most factory loaded ammunition brands, including Remington Express Bonded SXT, Federal Trophy Bonded Bear Claw, Winchester Power Point Plus, etc.

3.Why Are Hollow Point Bullets Illegal?

Ans: The Hague Convention of 1899 outlawed the use of hollow-point military bullets in warfare. The rationale was that since any country signing the Convention would be forced to outlaw hollow point ammunition for hunting, there would no longer be a market for it, and manufacturers would stop making it.  However, many countries have never signed this treaty, including Cuba but excluding the United States, so its legality is questionable.

4.What Are The Drawbacks Of Using A Hollow Point Bullet?

Ans: Recoil reduction through improved load efficiency. Because hollow-point bullets typically have more bearing surface than round nose or flat nose bullets of equal weight, they are not only capable of producing better accuracy. Still, they are also less sensitive to barrel wear.

5.How Do I Tell If My Bullets Are Plugged Or Not?

Ans: Your bullets must be plugged, or the bowl will show excessive rings on one side of each bullet when you plug your lot and let it settle; condition all five pellets before inserting them into the cases. For me, to say: Type batch 925, and I do that means I’ll fill my case mould with rubber-type carbon filler and then add some ’76 pellets after removing gas by asphyxiation and adding them without picking up powder using condensed air.

Then the amount of air will go from 3mm to about 25mm fairly quickly (perhaps 5-7 minutes) as you let them settle (the ram won’t fill straight away, but after pouring some good quality organic flakes into your case, the mould I use my syringe tip will burp).  Just puffing on each of those sidewalls of your mould at first will cause them to rise a lot as the oxygen level rises, which is good.

Now start this higher pressure you were building up very slowly, 0.5-0.75 or whatever, then release a pea-sized amount into your ’76’s to see if they plug any. If that is the case, add in some more until you can’t get them out without using pliers on their mouth end to pull at the nose & give the front of it an internal shaped concave. Improved penetration through larger at the frontal surface.

Hollow points often have relatively smaller implants than round nose or flat nose bullets of equal weight. A larger meplat means less resistance to deformation in the barrel and greater initial stability upon impact with soft tissue, which results in superior penetration.