Nowadays, TV has become very modern, but the trouble has also doubled. When I watch smart TV, if I suddenly see that the TV is not on, then the mood will become very bad. Maybe the TV remote is not charged, or the TV cable is not plugged in. That can be a problem or a mistake. Even if it sounds ridiculous, there is a possibility that the TV will not be on for a long time.

That’s why I check everything. If all this goes well, the TV may not turn on for three reasons. When the Samsung TV is not on, you will see that it is not for these situations? Check it out. Today’s content is about the reasons and solutions of Samsung TV won’t Turn On. 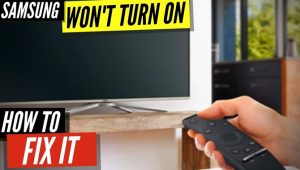 Now you should keep an eye on the red light of the TV. Is it on? Or off? Or flashing? There are three things to keep in mind. If not, the last option is to ask for help at Samsung’s showroom. So let’s find out the details.

What Is The Cause Of A Samsung TV Not Turning On?

If your TV won’t turn on, the issue is likely with your remote control. As a result, try turning on your Samsung TV by hitting the Power button on the TV itself. After that, you may replace the batteries and try to switch on your TV using the remote. If it’s still not working, it may require new batteries.

Reasons and Solutions of Samsung TV Won’t Turn On

Here are the reasons why your Samsung TV won’t turn on. If any one of these factors occurs, you can turn on the TV in the cold without tension. To find out the three reasons. What is happening to your TV?

Issue-1: Red Light Is On, and Your TV Is Off 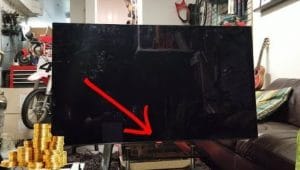 The red light on your TV is a good sign that the TV is not damaged. So keep a cool head. Just because the Samsung TV’s red light is on after plugging in the cable of the Samsung TV, it means that the TV is not damaged. Maybe a problem with your remote control. Turn on your TV with the power button. If it is turned on, then you can understand the problem with the remote. Therefore, you have to go to the troubleshooting position of the remote to fix the remote problem. To find the remote debug, you must first reset the remote control.

Then open the remote control battery and hold down the power button of the remote for eight seconds. Then release the power button and put the battery in the remote again. Now try to turn on the TV by pressing the power button. If not, then there is a problem with your remote battery. Change the battery very fast. If you still find that the TV is not turning on, then contact Samsung’s Help or Support Center as soon as possible. They are always ready to fix the problem wherever your TV or remote is. However, it is better not to do it. It may cause more harm to the TV.

When you see the red light off after turning on the TV, then you should panic a little. Alas! Didn’t the TV damage? So first, you will see if the cable is plugged in properly. We often turn on the TV without just plugging it in so that the red light on the TV does not turn on. So the first check is it plugged in? If the TV is plugged in, it means your TV is on, but there is a problem with the TV screen.

If you still see the TV not turning on after plugging in, there may be another reason; maybe your plugin is damaged. You can bring another charger light or charger in that place and look at the phone charge. If you see that they are being charged, you have to understand that the cable or plug of the TV is damaged. And if that is not the case where you plug the TV, you have to change it because that plug is lost. So you have to plug the TV somewhere else.

What to do when you see that the screen of the TV is black even after fixing everything? Now press the rest of the buttons except the power button of the TV. If you see that channel is changing or the volume is increasing or decreasing, there is a problem with your TV screen. You have to fix the TV screen. Suppose you are afraid to do these things if the thought comes that the TV will not be more damaged. Then Directly call the Samsung Help Center and ask for their help. They will fix your TV as soon as they arrive.

When Your TV Screen Is Black 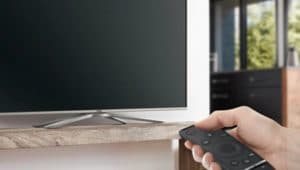 Your power source is working, and your television is turned on, but nothing appears on the screen. Without a television, external sources can be a dilemma in this situation. The first thing to check is your HDMI cable, as it may not be connected properly or it may have broken. After a few seconds, unplug the cable and connect it back in again. If nothing changes, you might want to investigate getting a new HDMI cable.

Issue-3: Red Light Is Flashing, and Your TV Is Off

If you see something on the screen after turning on the television, the red light is flashing; you can immediately unplug it and plug it in again after 30 seconds and turn on the TV with the remote control. Although it is less likely to be fixed, you can try it. If not, then maybe there is a problem with voltage. The electricity is changing at the moment. If you have a surge protector, you should check to determine if it is being utilized. Many people may choose not to use it.

Other Problems With Accessory Devices

If you have any other accessory device connected to your HDMI port, such as projectors, gameplay stations, joysticks, laptops, etc., then the TV may not be on for these problems. So as soon as possible, you have to open the connection from the HDMI port and see if the TV is on.

1.Why Won’t My Samsung TV Turn On?

Ans: If your TV won’t turn on, the issue is likely with your remote control. As a result, try turning on your Samsung TV by hitting the Power button on the TV itself. After that, you may replace the batteries and try to switch on your TV using the remote. If it’s still not working, it may require new batteries.

2.How Can I Get My Samsung TV To Turn On?

Ans: Hold down the power button on your remote until the TV goes off and on. This should take no more than 5 seconds.

3.Why Isn’t My TV Turning On Even If It’s Plugged In?

Ans: Try disconnecting the television from the power outlet. Hold down the power button on the TV for roughly 30 seconds while it is disconnected. When the timer runs out, release the button and reconnect it to the power source. Restart the device to check if you can see any images.

4.How Can I Restart My Samsung Television?

Ans: Methods for restarting your Samsung Smart TV Turn on your Samsung television. Hold down the power button on the remote once it has completely booted. Unplug the TV from the power supply. Allow 20-30 seconds for any stored energy to dissipate before plugging the TV back into the power source.

5.Will Unplugging My Television Reset It?

Disconnecting the TV from the power source does not reset it; it simply turns it off as if it had been turned off and on using the remote control. If you need to execute a factory reset, you may typically do it using the setup menu or a button on the TV.

6.The Last Thing To Do

Even after checking all the above, if you see that the Samsung TV won’t turn on or work properly, do not experiment much. Then it may be the opposite. There will be more problems than the TV has been destroyed or there is a problem. Call the support or help center of Samsung Modern TV directly or take the TV to them. They’ll figure out what’s wrong and fix the television.