We are living in the age of the internet and technology. Everybody is online anywhere across the globe. Over time, the sources of our entertainment have changed. Nowadays, the online multimedia platform is the major source of entertainment.

It seems a problem. As you can no longer watch the contents when the subscription period runs out unless you buy another subscription. Many people try to figure out other options. May be screen record is a possible solution. Can you screen record Netflix? Well, continue reading and you will get the answer. 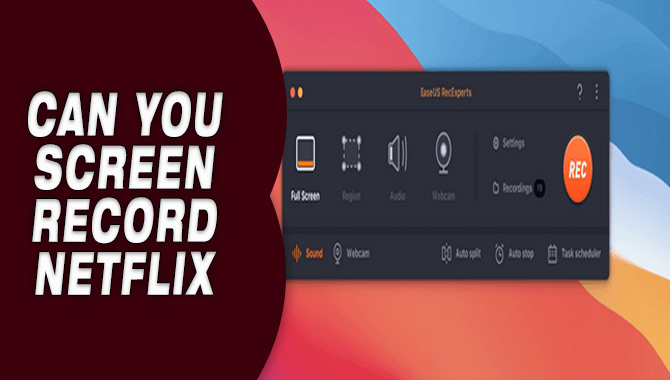 What is Screen Recording?

Screen recording is a video of whatever is displayed on the screen at that time. It’s also known as “screen capture”. While there are several methods to record your Android device’s screen either natively or via third-party apps, most users rely on Android SDK tools.

Why Screen Recording Netflix is Tough

Netflix uses Digital Rights Management (DRM) copy protection technology. It’s used to prevent users from transferring Netflix videos onto non-approved devices. DRM also prevents the video quality from being degraded if you transfer them for example via email or upload it to an unauthorized third-party service.

The only way how to remove DRM is to bypass device’s operating system. The only way to do this is to use Google’s Android Debug Bridge which allows to run custom code on the device while it boots up. Once you achieve that, DRM protection can be removed using a software unlocker tool.

Can You Screen Record Netflix?

Yes, of course, it is possible. Netflix does not allow its original contents to go available elsewhere. And this is the same reason why people all over the world try to screen record Netflix videos for rewatching. There is no doubt that screen record copyright content is piracy and illegal. You may face legal actions if you do so. But if you screen record contents for your personal use, you might face no troubles. Let’s get ready to learn screen record Netflix with multiple devices and software right below.

You can easily screen record Netflix with your Android device. Android version 10 or the latest versions have the built-in screen record feature. It can record good quality 60 fps videos. It also provides excellent sound quality. You do not have the Android 10 or the latest versions! Worry not, we will help you too. You can record your screen and thus capture Netflix content using third-party apps. Let’s discuss the steps of screen record using an Android device down below.

Android versions older than 10 may not have a built-in screen record feature. Don’t be hopeless yet. You can still record your screen to capture Netflix videos using third-party Android apps. One such kind of screen recording app is AZ Screen Recorder. This is a very lightweight and useful app.

iOS users can record Netflix videos using the iPhone built-in screen recorder. If you have iOS version 11 or the latest versions, you can find this screen recorder at the Control Center of your iPhone device. We are listing the steps here.

If you are a Windows operating system user, here we are to guide you. You can screen record Netflix videos using some Windows software.

Screen Grabber Premium is a paid screen recording app. It can record HD quality videos along with high-quality sounds. This app allows using a trial version. Using this app, you can easily screen record Netflix videos. We are describing the steps below.

Let’s take a quick peek at the answers to some questions asked about screen record Netflix.

1.Can You Screen Record Netflix?

Ans: You can certainly do it by using screen recording apps. It is also possible with the screen record feature of your Android or iPhone device to do it.

2.Is It Legal To Screen Record Netflix?

Ans: It is illegal to screen record Netflix contents. Because Netflix owns the copyright of their original contents and they are not available elsewhere.