It has been a while since the invention of firearms. Muzzle-load firearms are the oldest as they mark the exact age of the firearm invention, back in 17th century Europe.

History teaches us that the first riffle on the earth was a muzzle-loading rifle, invented in 1610 by the craftsman, gunsmith, and inventor named Marlin Le Bourgeois.

This brilliant gentleman conjured a muzzle-loading rifle for the King Louis XIII of France.

The muzzle-load gun is a kind of firearm. We load the charge or propellent of this gun through the muzzle hole. These guns remind us of the glorious and golden past—still, many firearms manufacturing companies worldwide produce muzzle-loading weapons.

We can find some old ones at different museums. Again, many collectors have muzzle-loading guns in their prestigious possessions, from a few decades to a couple of centuries earlier. But how could we know the age of a gun?

Worry not; we have got you covered. So, how to identifying markings on Muzzle-load shotgun?

Here in this article, we will help you identify markings on a muzzle-load shotgun or any firearm. But believe me, first, you have to understand what proof mark is. What is Proof Mark? A proof mark is a sign, logo, symbol, or cypher inscribed on a firearm to prove that the gun has passed safety tests, thus safe to use.

After manufacturing any product, we need to know how good the product is. The same is the case for guns. In case of firearms, tests are even more critical, because it involves life-threatening risks.

Suppose you are firing a weapon you have just bought. While firing, your barrel bursts on your hand. Wouldn’t it be a massacre? For this reason, every firearm must go through proof testing to make sure of our safety.

But how could we know if they proof test the gun or not? Here comes into play the markings inscribed on your firearm.

Proof Houses around the world, the organizations or authorities in charge of proof testing firearms, put on markings on firearms, after proof testing, as proof that the guns are safe to use.

But there are other signs or markings on a gun that the manufacturer puts on them. So, not all markings indicate that the weapon is proof passed. Some markings may show when they manufactured it.

We are trying to say that by identifying markings on a muzzle-load shotgun you possess, you can learn when they made your shotgun and how safe it is to use. 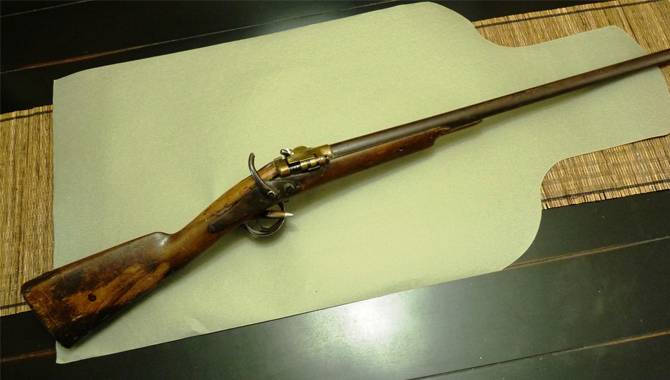 We already know that the markings on your muzzle-load shotgun can be proof marking, the logo of the manufacturer, manufacturing-time indicating marking, etc. It is like finding a needle into a haystack to recognize markings.

The different proof house uses other identifying markings. The shape of these markings varies from country to country or proof house to proof house. For example, the proof house of London uses different marking than that of Birmingham, Belgium, or Germany.

If you can identify the marking on your gun as a London proof house, your weapon is somewhere from London. Here we discuss identifying some markings we can find on firearms below. 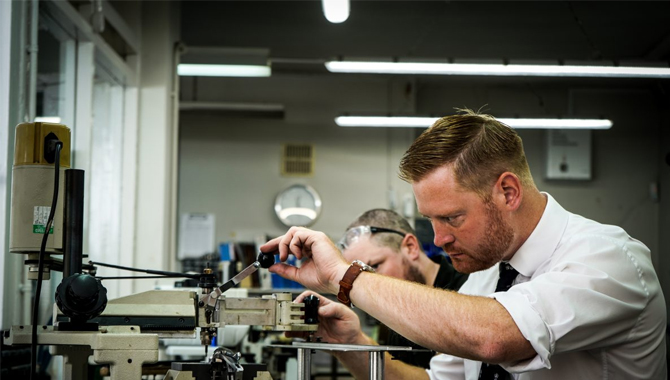 London arms manufacturing companies felt the need to have an authority to prove-test the guns back around the late 17th century. As a result, they established the proof house of London in 1672. Though it only proved the guns manufactured in London.

Then, it was illegal to bring in other firearms in the London market. The London proof house used and is using some distinctive markings on the proved guns. We are trying to picture some markings along with the time London Proof House used those markings. 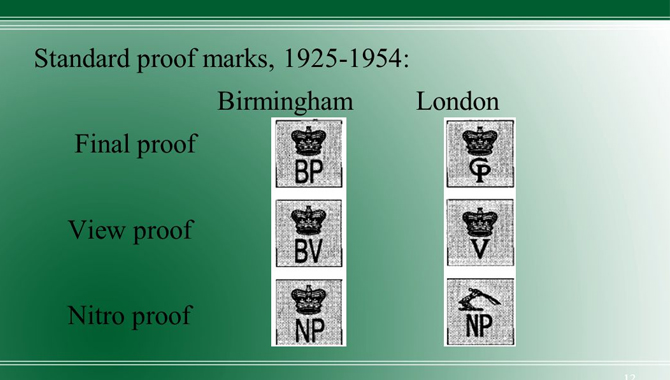 Birmingham established a firearms proof house back in 1813. But the gun manufacturers did not follow the rules. They frequently violated it and sold guns without any proof test.

After several failed attempts from 1813 to 1865, they established the successful proof house in 1868. Birmingham Proof House used and is using different proof marks than those of London’s.

We are trying to picture some markings along with the time Birmingham Proof House used those markings. 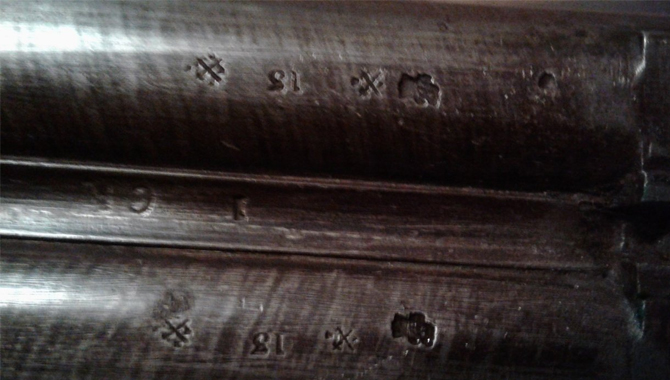 Liege, a city of Belgium, was famous for manufacturing firearms back in the 17th century. In 1672, the Liege municipal authority established a proof house for proof-testing Belgium made guns. From 1849, this proof house upgraded its proving systems.

They used and are using distinctive markings on their proven guns. If we can identify these markings on our weapons, we may know the manufacturing time. We are trying to picture some markings along with the time Belgium Proof House used those markings. 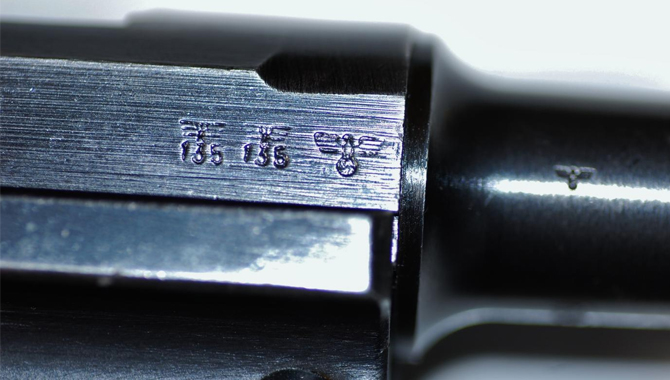 We can find distinctive markings on German guns that are proof tested. They also use some English alphabets on their proved guns to indicate the time they manufactured the weapons. We are trying to picture some markings to understand the German-made firearms better. 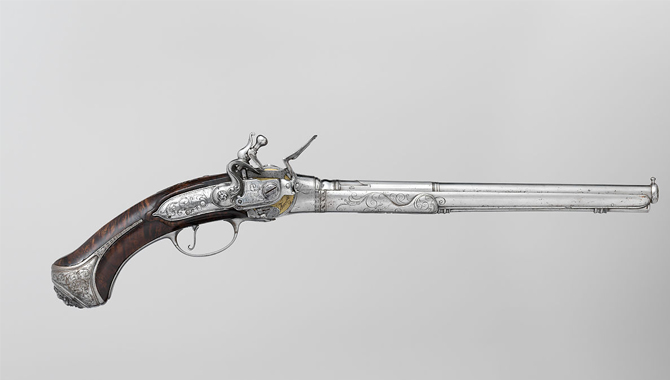 Date codes indicate the last two numbers of a relevant year. Every manufacturer follows them but with one or two exceptions. They follow the same principle, except for one or two differences. We are enlisting the date code below.

If you see AG inscribed on your gun, along with a German proof mark, you can understand that they made the gun in 2006 as A and G indicates 0 and 6.

Similarly, if you see HK on your weapon, it was made in 78, meaning that 1978. Almost all the firearms manufacturers in Germany follow these date codes.

Only Sig Sauer, a well famous company, makes one exception. They use the letter J for the number 8 instead of using I for 8. So, if you see a marking like HJ along with a German proof mark on Sig Sauer’s gun, you can understand that the HJ is a date code, meaning they manufactured it back in 1978. 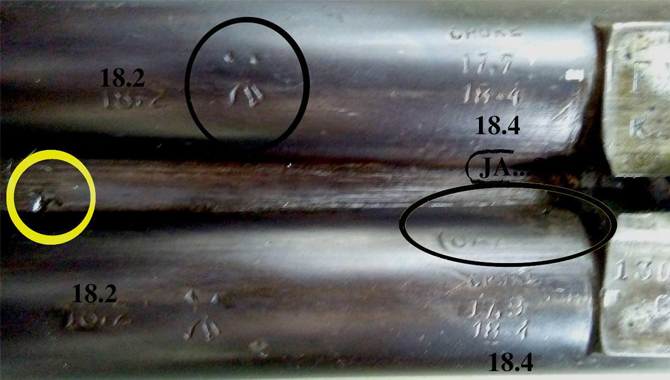 Italy is prominent among the firearms manufacturing countries for centuries before. We can find distinctive markings on Italian guns that are proof tested.

They also use some English alphabets on their proved guns to indicate when they manufactured the weapons, like the German guns.

We are trying to picture some markings to understand Italian-made firearms better.

Again, there are some marks we can find inscribed on Italian guns, which indicate the manufacture’s name or cartouche. 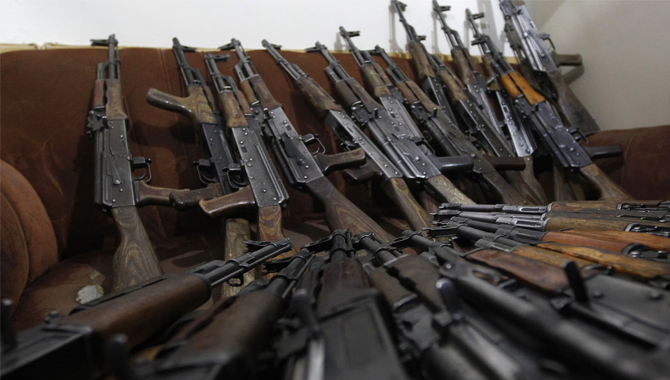 Italian companies use a long list of date codes on their guns. It would be better to understand if they put on the dates instead of the date codes. We are giving here some code examples.

The moral of the story is that if you see alphabets or Roman numbers into a box, maybe the marking indicates the year they manufactured it. So, it is possible that this marking on your muzzleloader shotgun is indicating the date of manufacture.

It is prestigious to possess an ancient gun in the collection, and it becomes even more precious if the weapon happens to be a muzzleloader shotgun.

You can find many markings on your gun. It is possible to know the history of the firearm by identifying markings on the muzzle-load shotgun.

This marking can be a proof mark, indicating where and when they manufactured the weapon. Or it can be a marking inscribed on your gun by the manufacturer, showing its cartouche, brand, or guild.

Again, this marking on your weapon can be a date code, indicating the year they manufactured the gun.

We hope that this article has come in handy for you identifying markings on the muzzle-load shotgun.

If you still have not successfully recognized the marking, we recommend you take a picture of it and post it in different firearm forums. Or search more on the internet, look for possible matches.

I hope now you know how to identifying markings on Muzzle-load shotgun. We wish you good luck, peace.