As human beings, we all want to be mingle at one point in our life. Having a feeling of love is very natural. Everyone wants to love and care for their beloved ones. When it comes to talking about relationships, we all become emotional for a while.

It happens because we have certain feelings for our beloved ones. We all are different in our ways. We have different choice and personality. So, how to keep ignoring a guy who rejected you?

Yet, it’s very natural to have an attraction to the opposite sex. You may definitely fall for someone at your teenage or even later. But life becomes disastrous if anyone rejects you. when you get rejected by that person with whom you want to share your entire life.

And then, you somehow try to ignore the guy who rejected you. Girls tend to feel broken after being rejected, but it shouldn’t be the case, my dear friends! 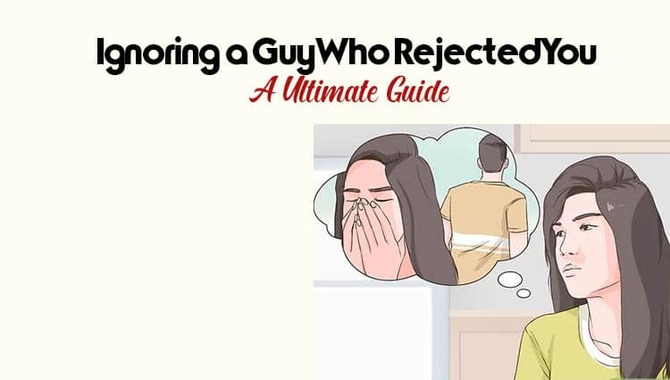 Why Is It Important To Ignore The Guy Who Rejected You: 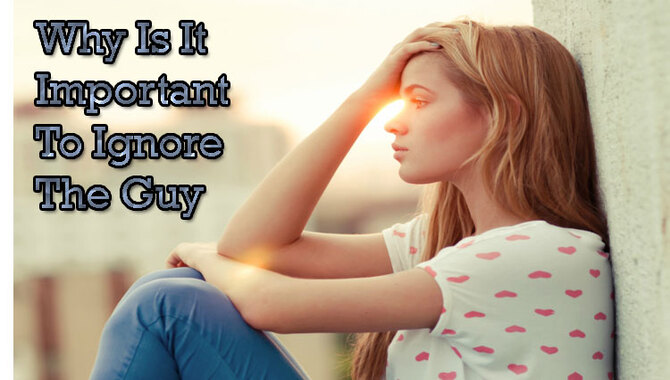 Sometimes we get rejected and think that life ends here, but that’s not the case. We live only one life and that should be for us and for the people who give value to our emotions. Why would you destroy self for one guy who rejected you? This is not fair, dear!

You need to be a strong warrior. So, learn how to defend yourself in difficulties. Move on, and find a better way. Usually, you people try to find different ways to ignore the person who rejected you.

But now, you don’t have to call anyone to solve your problem.  Rather here, you will get some very amazing points that will work for you. And, these tips would work in your case. 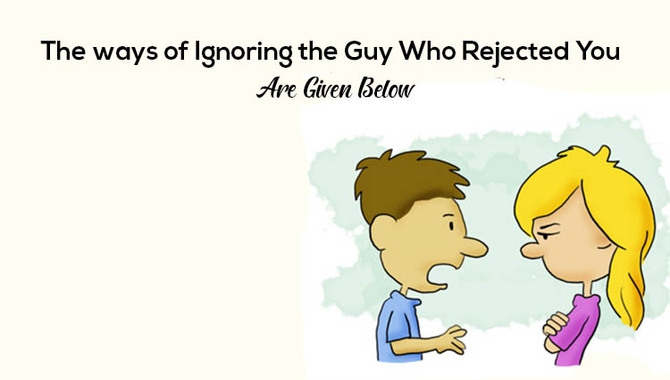 1. Not Receiving Phone-calls and Stopping to Reply Messages 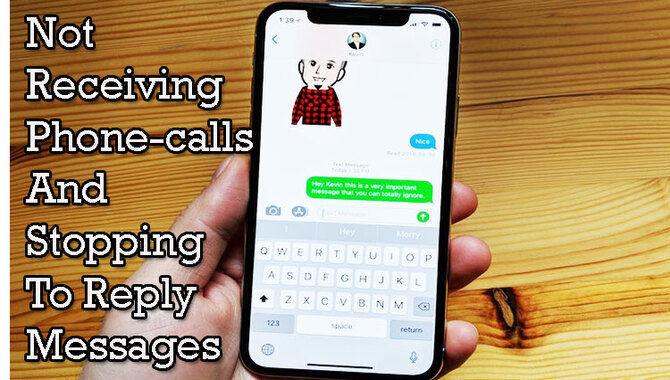 Boys sometimes reject girls but they want to keep the friendship and to hang out. But it hurts girls because they were not thinking about friendship. Rather, they are expecting more than this. They are even rejected. The best way to avoid them is to ignoring phone-calls.

You may even block their numbers. And don’t even reply to their texts. Don’t even bother about whatever they write in messages. It will help you to be strong enough to ignore the guy.

2. Keep Yourself Away From The Guy 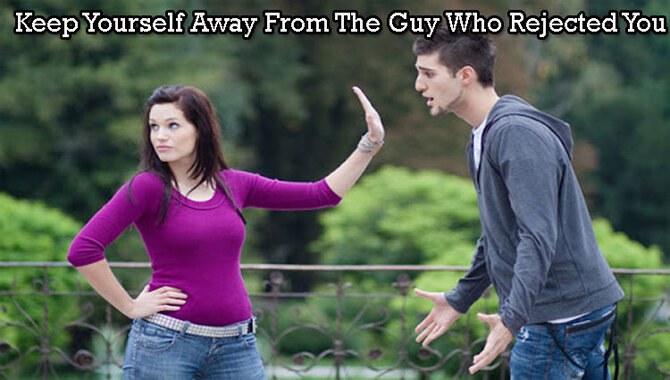 Many girls find it very difficult to forget the guy whom they loved. It happens when you are in the same office or workplace. If you meet the person, then it makes you upset because you keep remembering the past. So, if possible try to keep yourself away from the guy who rejected you.

Choose another workplace or maintain distance from the guy to ignore him. In this world of social media, now it is very easy to keep yourself busy. You may even do many other creative works as well. Besides, you may even hang out with your friends more often.

When we start liking someone, we completely fall for the guy. We want to get that person anyhow. But it’s heart-breaking to get rejected by the guy whom we love. It is not even expected. Yet, it’s not needed that the guy will love you back. He may have another choice.

So, it will be better for you to try to keep yourself busy with different tasks. Being multitasking will save you from being broken deep inside. It hurts at the very beginning but it is not that tough to overcome the pain.

4. Avoid Joining The Get-Together of Common Friends For a While 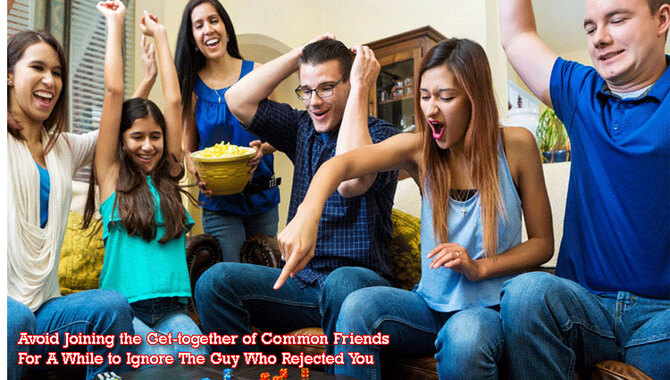 Sometimes we keep common friends with the person whom we love but got rejected. It makes your task difficult because you have to meet the person more often and you won’t be able to forget him. Moreover, you can avoid going somewhere, where the guy is present.

Breaking friendship with others is not a good solution at all. You may take time to be enough strong to ignore the guy, then you may join the parties of common friends as well. It lets you forget the incidence a bit easier than before.

5. Prioritizing Yourself Will Help You to Ignore The Guy Who Rejected You 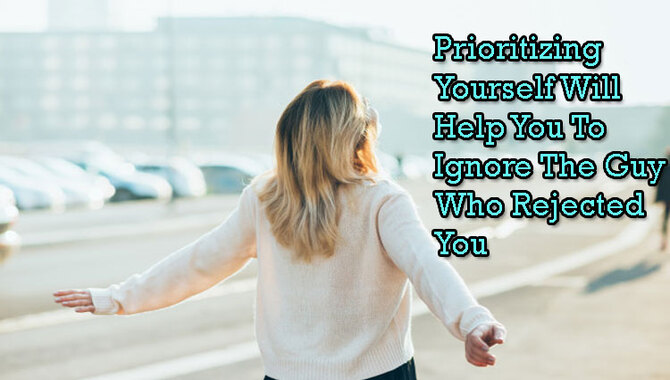 Self-respect is the most important asset for every girl. You need to understand your value. You shouldn’t learn to value yourself, then it will be easy for you to ignore the guy who rejected you.

Never fall for someone who doesn’t know your worth. If you give yourself the utmost priority, then you will be strong-hearted. Thus, you can ignore the guy.

6. Controlling Your Emotion To Ignore The Guy Who Rejected You 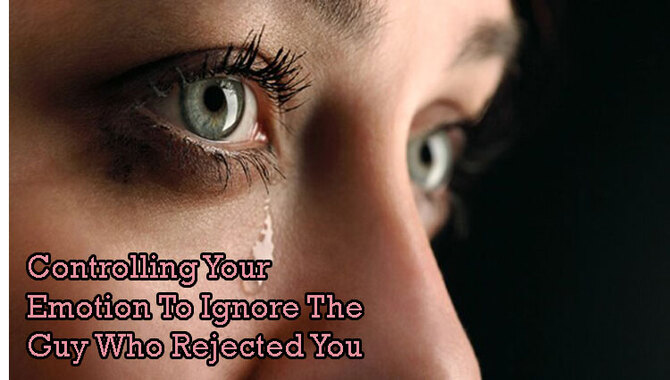 Being in love is completely an emotional attachment. But you need to have control over the emotional feelings. Don’t get mad for the wrong one.

Life will bring you a better one for you. Instead of being emotional, try to be logical. Think with reason and ignore thinking about the guy who rejected you.

7. Avoid Going To The Same Place 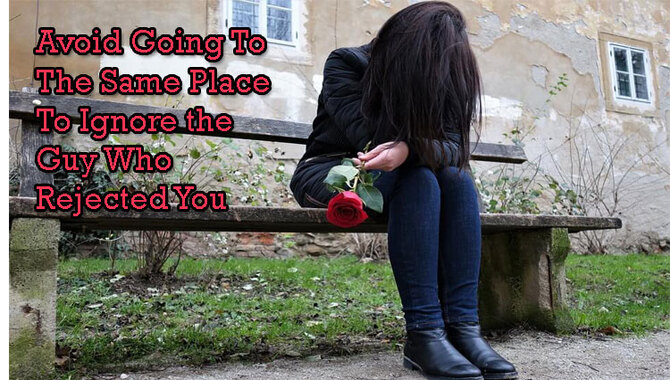 When you meet the guy then it becomes difficult for you to avoid him. So, you need to stop going to the same place. Say him ‘no’, if he wants to meet you again and again.

Guys sometimes want to take your advantage but don’t let this happen. Ignore him. If you see the guy regularly whom you want to ignore, then it becomes difficult for you to ignore. So, maintain distance for your betterment.

8. Ignore The Guy By Silence 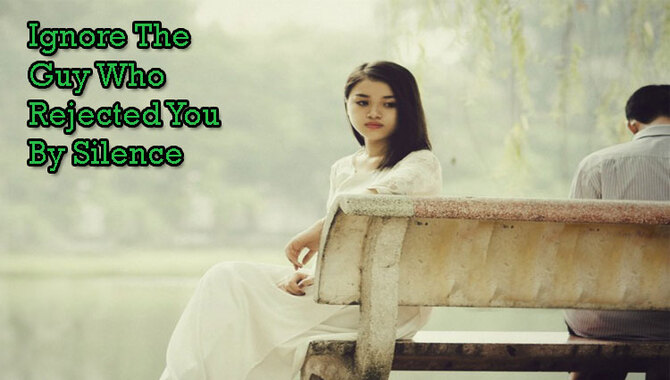 There is a saying that silence speaks louder than words. To some extent, it is true and it works. You may ignore and insult the person without even saying anything to him.

You may leave the place without uttering a single word to the guy. It will hurt his ego. And he will also try to stay away from you. So, you will get the chance to forget him easily. Remember, silence is a very powerful sword to hurt anyone.

I’m not really sure how to do this one, but I know it will work. If you see your crush all the time hanging out with someone else, come up to them and start an innocent conversation.

Before he can give his whole attention to you, say something like, “Hey Greg! What’s going on over here? Wanna meet my friend Sarah?” Your target should be genuinely confused at this point- look him in the eyes while doing so. When he looks back be sure to say things along these lines :

“You don’t mind, do you? We have this thing called being friends. It’s pretty real.”Then you can simply continue with normal conversation for a bit, but be sure to send subtle little glances his way now and then so he doesn’t realize there is anything strange about the situation or who your friend really is.

1.Do Guys Regret Reject You?

Ans: Maybe your guy regrets rejecting you in the past because he realizes that he has made a mistake in doing so. You should understand that not all guys are like this and some of them do actually regret turning you down.

Ans: You should not feel embarrassed when a guy rejects you because this is something that happens to nearly every girl in the world. You can ask for his opinion but if he does not say anything it means that he probably has nothing to add to the conversation.

Don’t take too much time trying to make him feel better about what happened because this is not something that he wants to hear about at the moment. However, you should be there for him now more than ever because it will show him that you are sincere about this matter.

3.How Do  I Ignore My  Crush After Rejection?

Ans: What you should do is ignore how he feels and try to focus on what’s happening between the two of you instead. This will help you in the long run and it might even make your crush feel better about having that conversation with you sooner or later.

You don’t want anything like this to ruin the relationship that the two of you have so you should be careful about what you are doing around this time. Be sure to follow our advice when it comes to this subject so that nothing goes wrong in the future.

4.Is Ignoring Someone A Form Of  Rejection?

Ans: Ignoring someone who rejected you is a form of rejection because this will show him that you are not interested in being around him anymore.

If your boyfriend is ignoring you then he might have done something wrong in the past so it’s important to confront him about this as soon as possible. You don’t want to wait until it’s too late to act on this matter because it might be too late to solve anything.

5.Should You  Still Talk To  Someone Who  Rejected You?

Ans: If you want to talk to him then you can do it because whether he likes it or not, the two of you are bound together by your past experiences. This means that even if he was initially mean or rude to you then he might be different now so go ahead and try talking with him again.

Don’t take too much time thinking about this because it could cause you to think negatively about yourself and that’s never a good thing to do. This decision should be made as soon as possible but we recommend that you take your time with this subject.

In a nutshell, it becomes difficult to ignore the guy who rejected you. You shouldn’t hurt yourself. It is important to ignore such a guy and move ahead. You have your bright future ahead, so shape it. Don’t ever bring yourself down in front of someone who doesn’t know your value. Overflow of emotion only gives you pain and suffering, nothing else. So, you need to be well aware of preserving your vanity.

Do not let anyone destroy your life. Thus, be such a kind of strong girl, and let him know your worth. So, ignore the guy who rejected you for your betterment.

Most, whenever you will choose someone else for you in future, be judgmental and logical. Live and live for yourself. I hope now you know how to keep ignoring a guy who rejected you. Put your efforts for the ones who love you back!